Urbanization not only heats up the cities, but could increase extreme rainfall.

On 21 July 1999, Nerima-ku region of Tokyo received an unprecedented 111 mm of rainfall in one hour! Later studies lead to the conclusion that this heavy rainfall development was aided by urban heating due to the urban heat island effect of the Tokyo city.

With the cities in the world increasing in size at a phenomenal rate, the question whether larger urban footprints could enhance extreme rainfall is no longer solely an academic one. [[Urbanization not only heats up the cities, but could increase extreme rainfall.

We conducted controlled numerical experiments using a mesoscale atmospheric model coupled with a land surface model to investigate the hypothesis that the increasing of urbanisation causes significant increase of extreme rainfall values. 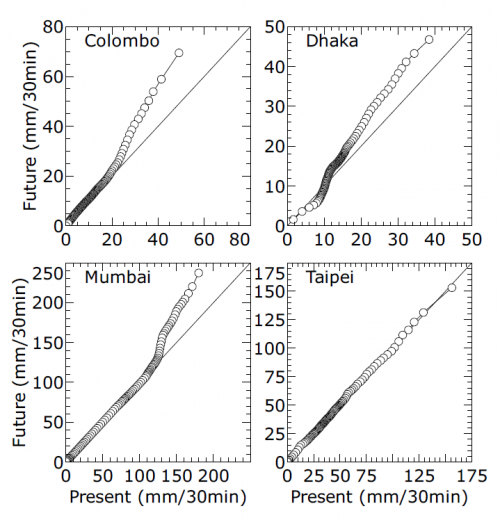 Extreme rainfall outcome for four Asian cities, 'Before' and 'After' increased future urbanization

The full published article is available at Atmospheric Research Journal web site. Accepted manuscript (hosted under Author rights) can be downloaded from below: