Difference between revisions of "Using Wiki in Higher-Education: Application in organizing research groups" 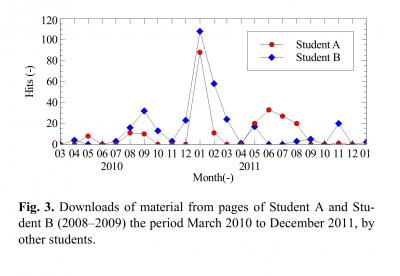 This is a natural extension of the story of this web site. I started this web site in 2006 hacking MediaWiki software. That was just before I moved from Japan to Netherlands and started working at UNESCO-IHE. From the end of 2006, I used the same contraption to support my research group at UNESCO-IHE (which consisted of five six masters students every year, myself and one or two other faculty members). The experiment completed its fifth year in 2011. I was thinking this is the time to document the experience when I came to know that Hydrology and Earth System Sciences Journal is publishing special issue on Hydrology education in a changing world]. Recently the article finished the review cycle and was published in HESS.

The article can be downloaded at: [1]

The figure on the left shows one important aspect of the Wiki approach. Student A and B graduated